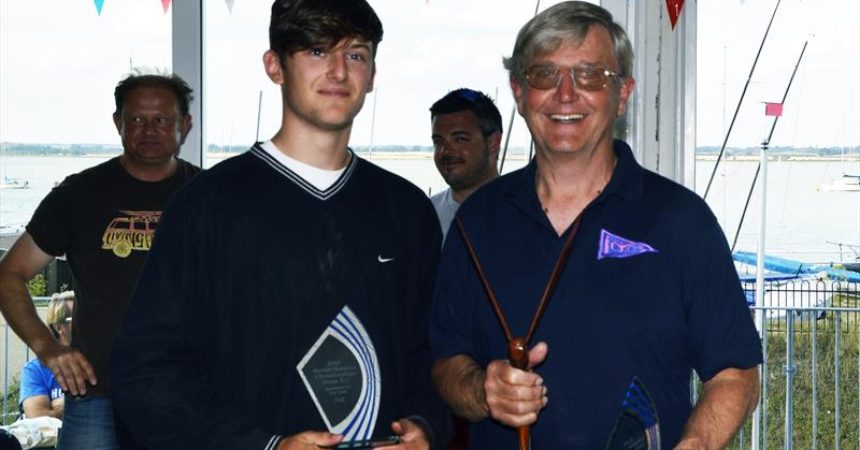 Stone Sailing Club situated on the River Blackwater in Essex played hosts to RYA Hornets National championships with all ten races completed over four days (17-20 August). And what an event it proved to be both on and off the water! Leading up to the championships, the forecasts suggested that sitting on the sidedecks would not be an option, perching on an upturned hull was more likely.

Amongst the top contenders were reigning champions Dick Garry and Sam Woolner sailing a new design from SP Boats. This boat besides its unique paint finish featured a much lower than usual crewdeck with sidetanks providing the best of both worlds in terms of crew comfort (we do like to look after our crews), rigidity and ability to self-drain. Multiple winner Michael McNamara returned with last year’s crew Harry Chatterton for another crack, along with hot competition from Chris Bines/Dave Gibbons, Mark and Paul Dell, Toby Bardsley-Dale and Richard Nurse and Nigel Skudder and Keith Hills.

Day one – the opener

Following a miserable Friday night travelling in heavy rain and poor traffic, the fleet were greeted by bright sunshine and a freshening south westerly breeze likely to cause a few thrills and spills. Race one was started very promptly, too promptly for some as they either took early swims or hadn’t engaged in full race mode yet.

The fleet was particularly eager at the start not helped by the flooding tide sweeping the boats upwind. An extra gun at the start was an ominous sign especially since only one boat seemed to return to the startline….Some of the fleet struggled to adjust the lively conditions with the wind against tide conditions creating a very confused, choppy sea. The fleet quickly spread across the race course as the capsizes started having an impact. Nigel Skudder from Starcross YC sailing with Keith Hills started well and demonstrated great speed downwind on the broad reaches, closely followed by Dick Garry and Sam Woolner in their new battleship grey vessel. However, final honours went to third placed Chris Bines with Dave Gibbons followed by mixed crew Strangler and Pippa with the Dells making third as Dick and Nigel, along with Dave Edge and Martin Arnison all picked up OCSs.

For race 2 the tide had turned so the boats would have to fight their way upwind in the blustery conditions. This time the fleet got away clearly without any mishaps. The first 2 reaches were fairly deep so spinnaker work was not too challenging although there were still a few upsets in the confused sea conditions. On the second triangle (3rd lap), the wind shifted to the left, tightening the first reach. Toby Bardsley-Dale and Richard Nurse enjoyed a blistering reach leaving the rest of the fleet trailing in their wake. They consolidated their lead on subsequent legs to take the finishing gun. Dick and Sam made amends for their earlier OCS to finish second, with Michael McNamara/Harry Chatterton in third.

The fleet, battered and worn, returned to the shore not knowing that these were going to be the lightest winds of the series. The Dells finished the day as overnight leaders with a 3rd and a 4th. That evening after the class AGM, the competitors were formally welcomed to Stone by their Hornet-sailing  Commodore Fran Wood.

The fleet took to the water in the continuing fresh conditions (SW 15-20kts), but with black clouds on the horizon. As the fleet approached the starting area for race 3, a prolonged squall hit the competitors with winds peaking at 32 knots. PRO Wendy Robinson very sensibly postponed racing and the fleet returned the shore for very welcome elevenses – how very civilised! When the fleet recongregated in the afternoon, the winds had abated but still a stiff, yet shifty breeze remained. Due to the later start, the strong ebbing tide would play its part as the racing progressed.

Race 3 started in slack tide with no drama at the start line. A tough fought race saw Toby and Richard continued their fine form from the previous day and pick up another win, from Chris/Dave and Mike/Harry with current championships Dick and Sam in 4th place.

By the start of race 4, the ebb tide kicked and combined with some stronger gusts of over 25 knots, the resultant steep chop made progress upwind relatively slow. In contrast, the downwind legs seemed to be completed in a blink of the eye. Michael Mac & Harry demonstrated superb speed upwind and by the end of the race had built up a considerable lead. Tony and Richard took second whilst some new faces slotted into the remaining top positions, Terry (“Trevor”) Curtis & Terry Palmer then Dave Edge & Martin Arnison

For the final race of the day, similar conditions were experienced with plenty of unplanned action of the race course. The race officer made the wise decision to shorten due to the strong tide and the need for the sailors to retain some energy for the forthcoming games night. Dick/Sam sailed well to take this race, followed closely by Strangler/Pippa, Toby/Richard with Duncan West and Ellie Hutchings in fourth place.

Ashore there were stories of mishaps and a catalogue of damage. Alex and Lucy lost a rudder possibly from overzealous use when avoiding other boats, but that’s another story. Chris Bines discovered a damaged mast thereby finishing his challenge. Following AGM, part deux (another story best not told), Games meister Simon Wakefield ran a hilarious night of team games and ritual humiliation including mass wine tasting through straws (the shame of it), challenging constructions with spaghetti and marshmallows and of course, the giant sack race. Apologises to Stone sailing club if your club house falls down, we were only following orders…..

Something went wrong with the forecast, we were expecting something lighter, we didn’t get it. The wind simply freshened during the day, with the last race held in gust approaching 30 knots. Fortunately, the majority of the fleet had mentally adjusted to the conditions and accepted that this was a “strong winds” regatta and engaged in to a no fear attitude. Well, until the last race…..

The day was summed up as a day that “Rhythm Stick” sailed by Michael McNamara and Harry Chatterton dominated the racing, winning all three races and thereby leaping up the overall placings.

In the first race, the over-keen fleet were recalled as the flood tide continued to catch the competitors out. On the second attempt, the fleet started cleanly with little between them at the windward mark.  Michael/Harry enjoyed a slim lead but gradually this extended as their superior upwind speed shone through. They were followed by Nigel/ Keith, the Dell boys and Dick/Sam.

In race 7, Michael & Harry again led the way but were heavily pursued by Storky/Mark Taylor and Strang/Pippa. These 2 boats swapped places throughout the race and ignored the carnage behind them. On the final reach, the flying Scotsmen flew past to take second.

Race 8, the wind stepped up a notch, the chop steepened, the fleet simply went faster…. in between the capsizes. Despite the conditions, the racing was very tight. Although Michael & Harry were leading, again Strang/Pippa and Storky/Mark were hot on their heels. On the final run, the breeze kicked in big time which separated the men from the boys, the lucky from the unfortunate. Several boats lost control and went for swims. As the fleet approached the leeward mark on starboard gybe, some of the leading boats chose to play safe and wore for a port approach: Many chose to gybe, some survived, others did not, including Storky and Mark. To add confusion the S flag on the committee boat, inadvertently and very briefly, unfurled itself as the leading boats approached the leeward mark. Some boats reached for the finish but when no gun was heard, hardened up for the next beat: The fleet concertinaed again for the final lap, but with less drama. Michael/ Harry took the gun for a very successful day’s racing. Strang/Pippa were second with the Dells having safely navigated through the chaos pulled up to third. Importantly, the leading team at the start of the day, Toby and Richard couldn’t maintain their great form, recording 5th, 7th and DNF.

Whist preparing for the traditional Monday dinner, the ladies of the fleet compared bruises and war wounds. Apparently, Jo Powell won but there was no photographic evidence to support this.

Stone’s catering team served a fine meal and many a glass of wine was taken with the competitors and the members of Stone SC. Once again Class Commodore Richard Barnes, took on his part-time role of chief auctioneer with various sails and goods generously donated by Exe sails going under the hammer.  Next a brand spanking new spinnaker, built to the new measurement rules and funded by new Chair Dave Edge and his crew martin Arnison was raffled off. The lucky winner was the retiring chair Eric Marchbanks! No conspiracy theories please. The rest of the night was, quite frankly, a bit of a blur but it appears that shots and bench-pressing crews are not a good idea.

Going in the final day, the wind had moderated to a very welcome south westerly force 4. Michael and Harry enjoyed a 9 point gap on his closest opposition Toby and Richard. Theoretically, they could still win, but it would require 2 wins and a bad day on the water for the leading boat. Just 6 points separated the 5 boats vying for second place – all to play for!

Race 9 started quickly with the fleet splitting to both sides of the course trying to gain best advantage  of the flood tide. On the first beat, favourable shits benefitted the boats on the left, with Nigel and Keith finally getting their act together, rounding the windward mark first and romping home to the finish. They were followed in by the Dells, Storky/Mark and of course never far away, Michael/Harry. In the process Michael and Harry clinched the championship with a race to go.

The final race was held in similar conditions with an almost slack tide. In the body of the fleet there were multiple places changes in the oscillating breeze, but at the head of the pack was the ever-present  “Rhythm Stick” winning by a good margin from Dick/Sam, Toby/Richard and Starcros sailors Tim Coombe and James Beer. This placing was sufficient for Toby and Richard to secure 2nd overall, from Mark & Paul Dell by a single point.

A massive thank you to Stone sailing club for a very warm welcome and great socials events (once again our apologises but I’m sure that floor was already sagging…). On the water, the race management was superb, particularly on Monday where the course was constantly re-jigged in a very timely manner despite the very challenging conditions. Finally thank you to our sponsors, Exe Sails, Marchbanks Architectural Planning and Canine Enterprises (Subsidiary of Doggie Dealings) for providing prizes and supporting our event.

The next Hornet event will be the Herne Bay open on 21st & 22nd September where we hope to see the first of the new rule spinnakers that are now class legal. Then to round off the racing calendar, we are off to Netley for the Final Fling 5th  & 6th  October where we shall be enjoying an experimental sprint series with the Contender fleet. If you want to join us, why not try our class boat (Championship winning in 2017)? Hope to see you there!