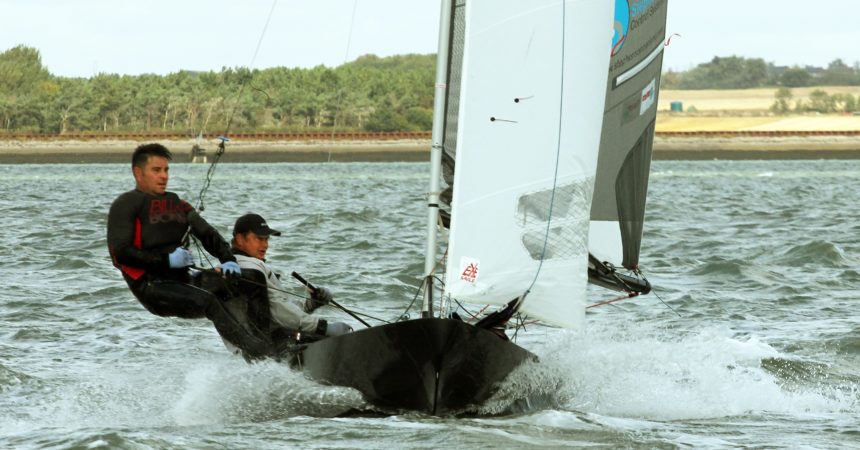 The Hornet fleet made a very welcome return to Netley on Southampton Water, for their Final Fling event over the weekend 5/6 October. The forecast leading up to the event was not great, the remnants of Hurricane Lorenzo were bringing a deluge of rain and wind around the country, inevitably numbers were affected.

As it happened, the small, but perfectly formed fleet combined with the Contender fleet and enjoyed some great, but challenging sailing over a slightly reduced series of 6 sprint races. This was also the debut for the first generation of the recently introduced larger spinnakers for the Hornets. These new kites are longer on the leech and foot allowing the existing maximum half height width to be fully exploited (approximately 10% bigger).

Saturday’s event was postponed until the wind decided to play ball and turn up. The fleet eventually took to the water in a light/moderate south-easterly, with most crews trapezing. Race one saw Dave Edge and Martin Arnison sailing “Mucky Mutt” (I think!) consolidate a good first beat to lead the fleet towards some ominous dark clouds. Despite the resultant 40 degree shift, they managed to stay ahead to the finish, from lightweight pairing Matt Reeves and Lizzi Blackwell. Both boats were sporting big kites…. Race two started in similar conditions, but very quickly the wind dropped. Local sailors Tom Guy and Scott Dawson sailing for the first time together, kept hard left to avoid the flood tide and led coming in the first mark from Edge/Arnison and Kevin Burt crewed by Barry Miller. After 2 rounds and no place changing at the front of the fleet , PRO Dougal Henshall made the wise decisions to shorten and finish racing for the day.

That evening the fleet enjoyed the fine fare offered by the club, including far too many pitchers of Dark n’Stormy. Some of us would regret that next morning! Best not mention the Contenders in the campervan….

Next’s day racing was brought forward to squeeze in an extra race. The fleet were greeted by a strengthening moderate to fresh breeze straight coming down the estuary that combined with the Netley chop would provide to be tricky for some.

Guy and Dawson started well on the pin to take a narrow lead from the chasing pack. On the first reach they extended their lead when the others struggled to hold their kites, finishing with a sizable lead from Edge/Arnison. Casualties within the fleet included Reeves and Blackwell, where a pulled out genoa cleat proved the end of their racing. The previous night’ exploits caught up with Mike Owen sailing with Lawrence Hartness, so they took the honourable option of retiring whilst still in one piece.

Races 4 & 5 were sailed in a bit more breeze with winds gusting up to 26 knots. Hornets and Contenders intermingled as back markers and lapping boats came together. Guy/Dawson stormed upwind and kept their cool downwind to win both races. Behind them, Edge/Arnison and Burt/Miller chased hard but a mixture of capsizes and gear issues held back their progress.

Most sailors probably thought three races was enough in these tough conditions, but the PRO received advice from the club’s beachmaster (and current Contender Ladies World Champion), Fiona Collins that “we were lovin’ it!” so we stayed out for another race….

For the final race, both fleets were seriously depleted. Burt/Miller struggled to right their boat before the start so were forced ashore. This left Guy/Dawson and Edge/Arnison on the startline with the wind in full metal jacket mode. This time, the race was much closer with no more than 2 boats apart most of the race. Guy misjudged the gybe at the wing mark and went swimming but very quickly recovered to re-challenge the leading boat. At the top of the penultimate beat, Edge tacked on to Guy/Dawson as they reached the starboard layline. Guy/Dawson dropped back but managed to work to windward applying the pressure back on Edge/Arnison who were running the mark close. Too close at it turned out as they hit the mark soundly as they rounded. Guy/Dawson took advantage and flew down the final run and back round to the finish, taking the series.

Special thanks to Netley sailing club for a terrific event, great race and shore management combined with a superb bar and galley crew made this is a very enjoyable event. And the new clubhouse is a very welcome upgrade since our last visit!!

The Hornets’ next event will be at Rutland for the symmetric event over 19/20 October. If you fancy a spin in the Hornet, the class boat is always available. Hope to see you there.